Somehow on my trying to remember how to enable scsi on the i386 qemu, I came across this fun project… Bkunix. No it’s *NOT* BURGER KING Unix… But rather a port of LSX-UNIX to the Soviet Elektronika BK computer.

The BK’s were sold as personal computers in the Soviet Union, and were cloned from the DEC LSI PDP11’s.

Later on, with the source being available, a project has been started by Sergey Vakulenko and Leonid Broukhis to port the LSX to the BK’s. What is neat about this, is that the entire system is built with a set of cross tools, to produce the kernel & userland utilities.

And the best part is that you can run it in an emulator! You can download it here. Just don’t over expect the MINI & LSX UNIX’s were meant to run on tiny machines with as little as 40kb of ram. However given such a small constraint, it’s very impressive to see it in operation.

Well I just found out about a “DEC Legacy Event” being held in the UK. Sadly I already booked tickets to the UK *this* month not the correct one… But then who knows… 😉

I suppose this would have been the place to get some win terminals going, and have multi-user access into a VMS system running on SIMH on an Alpha…

At any rate they promise to upload video from the aftermath, and they’ve got up some interesting promo pics

Well it seems at some point China has decided they don’t like me, and they are now DDOS’ing my server… Or they have some bot net that is OBSESSED with Windows NT 3.1 servicepack 3 for the i386…

So as much as I don’t want to, I’ll end up blocking China, Taiwan, Hong Kong from my server…. Oh well.

One can only speculate what on earth they find so interesting.

Then it’s just a matter of downloading a table of ip addresses. I’m using these guys right now… I just downloaded the csv version, ran it through access, and used that to create some queries for some tables, then ran that data through some minor C program I ended up writing to massage the netmasks into something the script would like. It’s not “nice” but it works. Then afterwards since they keep on downloading the same file, I just extract my IIS logs into access which has the ip address set as a primary key, then I’m just making /24’s of each one that does so….

Sigh, I don’t get why they are doing it, but they are getting a whole lot of 403’s now.

Well I was originally looking around at the new & exciting 16bit support for HX, but so far I’m having little luck… It seems all the ‘cool’ OS/2 stuff it should do just crashes out on me…

I’m hoping to get something going eventually.

In the meantime, I had to check to see if an old MS-DOS favorite, DJGPP was still around.. And not only is it still there, but they now support GCC 4.42!

DJGPP, is simply put a port of GCC to MS-DOS. The best part, is that the compiler, libraries, and even the dos extender are all FREE. The sad thing is that DJGPP hit popularity around the mid 90’s with the rise of Windows 95, and the internet… Kind of killing 32bit MS-DOS applications… However Quake 1 shipped as a djgpp/cwsdpmi application… I’m sure there are others.

So at any rate, I was intrigued that it was still around, so I fired up DOSBox, then downloaded the zips according to the zip picker, read the readme, setup the environment, and I was off and away compiling my trivial hello world.

Sadly for me, I couldn’t sleep, so I then just grabbed the f2c/dungeon stuff and did a compile… I only had to tweak a few things, mostly a garbled long file name thing, but in no time… It was running.

I did manage to crash dosbox building the libf2c, but luckily changing gcc to use the -O0 (no optimizations) it was able to build the library… It’s kind of sad generating a 150kb ‘hello world’ type application, but thats the price for essentially statically linking everything….

MS-DOS isn’t the most modern thing out there…. I always wonder if those kids writing a 32bit ms-dos like os ever got anywhere…

Today I found out that the latest ‘git’ repository version can run Windows NT in color, and with corrected mouse support! The NVRAM is still corrupting and you’ll have to fix the time/date but a usable mouse, and being able to see what you are doing go a long way!

If you feel adventurous you too can compile the emulator, I’ve downloaded todays snapshot to here in the off chance this won’t be build able for some time.

I don’t know if there is any good way to enable sound, but things like Visual C++ 4.0 & Quake 1 are usable in that you can actually see what is going on!

Here’s a screen shot of my NT 4.0 workstation…. 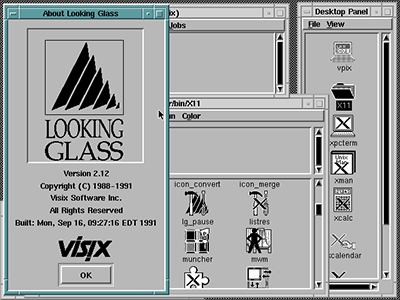 Well I was thinking of building something like this, but someone did the work for me….

You can find various images here.

So needless to say, a special thank you goes to the dietpc guy… These are all set for MS Windows users, just download the VM you want, and you are ready to go. The only ‘issue’ I had with the PowerPC one, is that I needed to run fsck on the root and reboot it…. (remember the root password is foobar).

Other then that it seems happy as it can be.

I wouldn’t dream of really benching it, but this is better then blindly cross compiling as you can check your work…

The downloads are quite sizable about 450mb each… but it is a complete run & go linux environment.

And here is a gratuitous screenshot:

Ok, so I was looking at this ancient machine the other day, and I was wondering if I could at least build the f2c to run on either Win16 or OS/2 1.x. There was mention of it running on MS-DOS ages ago but I thought it’d be more interesting to try something else…

Well one thing is for sure, QuickC for Windows, wins HANDS DOWN for a ‘nice’ environment for building stuff… Once it was all said & done, on Windows 2000, I had f2c running, and converted the dungeon source, and building dungeon along with the libf2c. I couldn’t find a ‘nice’ way to build libraries with QuickC, and building a windows dll for libf2c would mean re-writing the IO for Win16.. If it were 15 years ago I may have done so, but nobody will use it now, so I just took the short cut of compiling the dungeon program & the library together… Surprisingly on a ‘fast’ machine with Virtual PC, 100,000+ lines of code compiles in under 10 seconds!

So the first result I got for my effort was this:

Dungeon in QuickWin on Windows 3.0 via F2C

Which wasn’t that bad, and I’m just amazed it works… You can download it from here. And thanks to the power of jDOSBox, you can run it live here.

The next thing I did was break out some ancient Microsoft C, and start to build f2c. That is when I found out that the resulting exe with C 5.1 doesn’t work, and 6.0a crashes when compiling part of the translator… However using 6.0a for *MOST* of f2c, and building the one faulting module with 5.1 results in a working f2c. The library built without issues, although I had a *HELL* of a time trying to remember how to build a static library for OS/2. I ended up just using lib & gluing it together one object file at a time… Not the ‘best’ but it works.

The next hardest thing was figuring out the linker definitions & response files to build a ‘windowed’ text client for OS/2. Luckily I was able to go through enough things to do it, and it was a LOT of work…. I almost wonder if it’s worth posting about it… But all my build steps are in the zip file located here.

Dungeon on OS/2 in a window via special linking..

It was a *LOT* of nonsense work to get this thing in a window for a good screencap… lol but in the end I guess it was worth it. I suppose I could try building it for MS-DOS, but really, where is the fun in that?

One thing is for sure, having this back when I actually used OS/2 1.3 or Windows 3.0 (I had CGA!!!) would have been cool… But now I guess it’s totally pointless, but whatever.