Today I have decided that I should make a windows installer for the Unix v1 restoration project’s efforts on getting Unix v1 running.

For windows users this is a simple click & install project. This version of Unix v1 will support up to 8 simultaneous users on the system. Please note that this is a ‘rework’ of the v1 kernel from printouts to run a v2 userland, and the earliest C compiler from somewhere around v3-v4. It is not ‘pure’ per say as almost all v1 Unix documentation, tapes have been lost.

Simply install with all options, then click on the “RUN unixv1” link, and the kernel will load up (quickly!) to a login prompt. Login as root, and you should be good to go. Additional users can telnet into the host PC on port 12323 and they will be prompted to login. You can also use the “attach a pty” link, and it will launch teraterm pro onto the port 12323.

Because of the age of this system lots of commands that you take for granted did not exist back in 1972. A quick survey of my own use led to this:

Remember it’s on a system with 32kb of ram. Don’t confuse Unix’s humble beginnings with the later v7 on the VAX, or the BSD releases that added TCP/IP networking.

I have included the PDF for the 2nd edition programmers guide. Since the userland is from this generation it is as close as you will get to a system manpage.

To exit the emulator, you can just close the SIMH process window, or hit Control+E then q to quit. I’m not sure of a ‘clean’ way to reset a Unix v1 machine. If there is significant disk corruption, I’d just recommend un-installing this program, then re-installing. It is no doubt the saving grace about running this emulated. As far as I know nobody has run this on a physical PDP-11. You would require an actual 11/20 because of how the multiply / divide instruction is handled. I won’t run on any of the bigger PDP-11’s.

The project page is:

I got a used iPhone while on vacation, and I managed to jailbreak it, and load up the CLI tools, including gcc onto it… It feels VERY unixy now with the 2.0 os, all the good stuff like screen, lynx, vi .. So I decided to build SIMH on it. It takes FOREVER to build anything… But then I don’t think the iPhone was built to compile.. -O2 seems to break so sadly it’s without optimizations but it runs!

For the heck of it, I copied in my 4.2 BSD disk image, and rebuilt SIMH with SLiRP support, and now I have a hand held VAX!

It’s cool, and pointless at the same time… I’ll probably make some binaries available on sourceforge later.. I guess as iPhones eventually get phased out (1st gen ones for sure) it’d be cool to let them become servers or something useful along those lines…

Here is a screen shot for the curious… 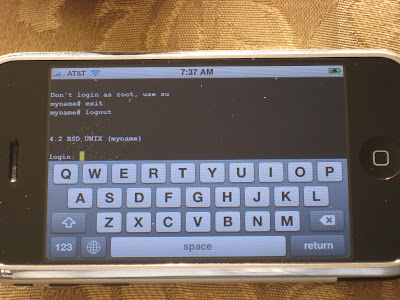 And yes, you can telnet into it, via the magic of SLiRP… I’ve tried building some irc clients, really old stuff does build and “work” but I think the server protocol has drifted as it cannot join any rooms…. So close & yet so far away.. I’ll probably have to move to 4.3 BSD..

I also should add that the iPhone VAX feels like an 11/780.. In that it takes several minutes to boot… Don’t expect a FAST machine…!