Well I was playing around with a version of 4.3 BSD I’d never heard of, that was from the University of Wisconsin, when I figured out a quick hack to get the 4.3 BSD’s networking operational under SIMH’s 11/780 emulator. I simply removed the error checking from the recv portion in the if_de.c file, and it now works!

So I have updated some packages on the sourceforge site:

4.3 BSD & UWisc 4.3 BSD have been added, and both are ready to run with SLiRP (User mode networking/nat).

As for the Wisconsin release, it may interest people as they had taken the NFS & VFS code from SunOS and integrated them into 4.3 BSD before the RENO time frame. From there it seems that most of the hackers at UWisconsin went on to either Legato or SUN to continue their work, leaving this release as a single event… The tape image seems to have last been used January 12th, 1987. This release does not appear on the UNIX family tree’s.. It’s like a long forgotten offshoot, but still I think it’s kind of cool. And it shows just how networking was done back then with nearly 4000 enteries in the hosts file!

I’ve been trying to track down some more info from the TUHS list, but if anyone else passing by wants to add anything, feel free to let me know!

Otherwise, the installer package on sourceforge should run on any Windows 98 or above machine. 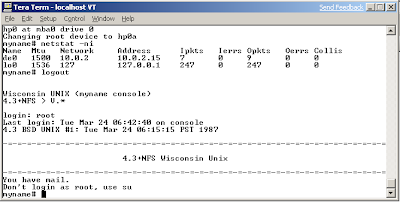