Skip to primary content
Skip to secondary content
Again for Linux/ OSX users, it’s no big deal as they have access to the ‘dd’ command. Well I was installing AT&T SYSVr4 when it hit me that you can somewhat convert physical disks with Virtual PC & Qemu…

In Virtual PC you can create a ‘virtual disk’ that links to a physical volume..

Once the disk is linked, re-run the utility and you can then convert the linked disk into a dynamic disk. Once you have your .vhd, you can use Qemu’s qemu-img tool to convert the disk image into qcow,qcow2 (Qemu) or even VMDK for VMWare. The syntax is pretty simple..

I’ve tested it with AT&T SYSVr4 & OS/2 1.3! Much to my amazement with the fixpacks, OS/2 1.3 will actually RUN on Virtual PC 2007. It’s a shame that IBM saw the SDK’s for OS/2 as a revenue generation opportunity, as it’s amazing how quick it is (once it’s done initializing….) but I guess that’s a given of any 16bit OS that’s written in assembly….

For the heck of it, here’s a screenshot. 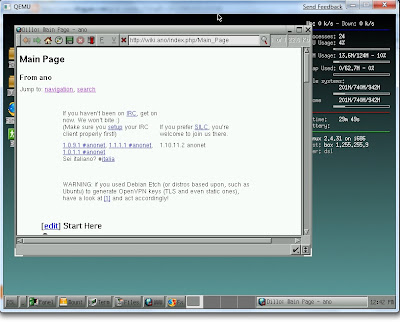 Well anonet moved client ports, and I was getting some questions about the whole thing. The client port has finally been well… finalized as far as I can tell. I don’t use it all that much but I figured that the ‘bar’ needed lowering for people curious about this anonet thing.
So what I’ve done for windows people is to setup an installable version of DSL linux that is just click and run that is configured for anonet. It’s got the DNS information all ready to go so you can run nirc and join the main irc server (don’t forget to edit the .nirc file if you so wish) and the dillo & firefox web browsers are also setup & working. However firefox is SLOW… But I figure this will allow people to easily see what’s what without installing any device drivers… And it’s more fun in a VM.
Currently I’m just sharing this in a torrent which you can download here:
http://www.mininova.org/tor/2185513
Naturally you can use things like utorrent (http://utorrent.com/) to download it.
It’s all setup in a nsis script that I’ve been evolving from the BSD4.2 on windows thing.. so it’ll be straightforward to install & uninstall. Vista & Windows 7 users need to remember that the disk image will re-appear in their:
%userprofile%\AppData\Local\VirtualStore\Program Files\anonet-client\
or
%userprofile%\AppData\Local\VirtualStore\Program Files (x86)\anonet-client\
Directories… so remember to remove it.. I don’t know how to do that nicely offhand just yet.
Oh well you can leave me feedback public/private anonymously or whatever.
Well I planned on doing an update, but I didn’t get around to it. I’ll post my fun thru dec alpha fun later.
In the meantime, I was combing ebay, and I saw a cheap copy of Watcom C++ version 11. Now back in college I had 10.0, and it was AWESOME! It does 16bit & 32bit development of OS/2 MS-DOS and even Windows… For some reason the guy who sold the Watcom 11 included some techsupport thing he had going on, and included a tidbit about their being a ‘Default-windows application [-bw]’ (it’s on page 7 of C compiler settings) and it’s like the old Borland C++ for windows, or QuickC for windows days… It’s too bad I never knew it was there, as it allows for easy text mode stuff to win32 enviroments like … Win32s.
Now Win32s was one of those funny things, in which some smart people noticed that for the most part the ‘core’ of Win32 was a superset of Win16, and all they needed to do was hook the program loader, load the win32 exe into a relocatable space, then thunk all the win32 calls into win16 calls allowing a bunch of win32 applications to run on Windows 3.1! This was somewhat popular as most peoples machines at the time were not powerfull enough to run Windows NT 3.1, or they simply wished not to. And Windows 95 was going to be nearly another 2 years away…
Anyways, I’ve always thought SIMH was cool in that it’s super portable, so spending 20 minutes clearing out the ‘win32 console’ specific stuff from the code, I was able to build up a version that not only runs on Win32s on Windows 3.1, but also supports the TCP/IP remote console.
Here is a screen shot of my Windows 3.1 running under Virtual PC, telnetted to itself running the simh microvax running VMS 4.7

Anyways it’s too little too late, but I think it’s still cool. The neat thing about this is since it’ll run on Win32s is that it’ll run on dammed near any emulator as it’ll conform to such a subset.. Or so I’m hoping. I imagine it should also run under OS/2 3.0’s win32s emulation as well… And yes I’ve tested it with Win32s 1.25a that’s before Microsoft ‘fixed’ it to break all the OS/2 users out there…