Skip to primary content
Skip to secondary content
I came across this site on a google quest for information about the Xerox Star… It’s even got an emulator for us Win32 folk!
Check it out! Don’t forget to extract the disk image in the same directory as the emulator. Once it’s started click on the icon on the far right (the one tagged 8000) and you’ll be greeted with this: 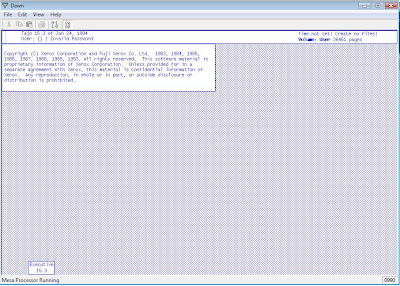 Woohoo, a minimal boot!… You can find more information on Star here. I’ve got to search around some more for some games & other stuff….
Well it was the weekend, and I was playing with FORTRAN (Language systems fotran to be exact, all 30lb of it!) and anyways to check to FPU & crash issues I though I’d check it out on an actual m68k Macintosh. So as I was using Basilisk II for some stuff, I was wondering if anyone ever did upgrade the CPU emulation to 68040/mmu emulation. And it turns out that the Basilisk II emulation is taken from UAE, which in turn has been used in a few other emulators including aranym.Aranym is “Atari runs on any machine”, and what these guys have done, is fleshed out the UAE 68000 emulation enough to where it will run m68k linux!

Both a windows version and the source can be found here.

Now for the fun part!

You can download a patched kernel here that supports the virtual Ethernet, or just run a stock kernel (no networking though!)

Next you’ll want some kind of root filesystem, I would recommend the ‘etch’ disk which can be downloaded here.

Naturally, you’ll need a config, here is what I’m using..

[STARTUP]
GrabMouse = No Debugger = No

I’ll have to play some with the networking to get it going, it seemed straight forward the FAQ here, however I had no luck.

Anyways, it’s no A/UX, but it’s a *NIX like thing on the m68k. Now we just have to beg the Mac people to flesh out the hardware on their emulators to support Linux, OpenBSD, NetBSD & A/UX….

Proxmox – VE has hit the 1.0 today! Without fail, I’d say this is the best combination of full system emulation, and logical partitioning available as of today. I have been playing with Xen on Solaris 10, and frankly it SHOULD have been better, but it’s been so much worse.

Although Solaris Zones, coupled with ZFS & Xen should be a clear winner, you’ll find out real quick that Zones do *NOT* easily allow for independant tcp/ip stacks (hope you have v3 nic drivers), the Xen networking again is a mess (v3 drivers anyone? Also those interfaces better be TCP/IP enabled on the host!) and get ready to edit the /var/lib/xend/domains directory files a LOT…. And be ready for gegrep fun. Afterall domain names like “0aa811ef-3bd0-9140-583f-d5e09f93658e” make life all the easier. I will say that Xen does use Qemu disk images so there is an easy ‘upgrade’ path to/from KVM (the linux hypervisor found in ProxmoxVE). What I don’t get is the massive disconnect between virsh & the xend process.

And if you are running Xen, the you’ll want SOME print documentation… I just wish I didn’t think it’d be that intuitive. So at least creating this:

If you don’t get something similar, you are screwed. Additionally this guide is invaluable as it’ll be your ONLY quick guide on how to get around xen on Solaris 10.

Anyways enough Xen bashing for now, but I have to say I’m excited about going back to ProxMox VE. Just remember to leave your base OS alone…. like a mainframe.

I was playing around with NeXTSTEP under a snapshot of qemu and I noticed that my arrow keys were not working correctly. After a few hours of digging about I found the fix was easy enough:
-k en-us
That’s it, just append that to your boot string, and away you go! Another annoyance has been my quest to install AROS onto a P4 computer.. I picked up a new 320GB IDE disk (WD Caviar Blue) .. which the BIOS & AROS promptly refused to acknowledge corectly. Everything was going to hell until I gave up and read the manual. Once again it was simple, there is a jumper setting for ‘older’ OS’s to see only 32gb, and naturally the BIOS is now happier. If only I could say the same of AROS…

Well it’s about that time, and OpenBSD has now just released version 4.4!
I’m a big fan of OpenBSD, and of course I wanted to load it up on my laptop. I’ve been wanting to do some tests with Quake1 so I have setup a test server, and now I was needing a client, so I figured OpenBSD should be able to do this.

I installed OpenBSD 4.4, ran ‘startx‘ and naturally had a completely deformed screen.