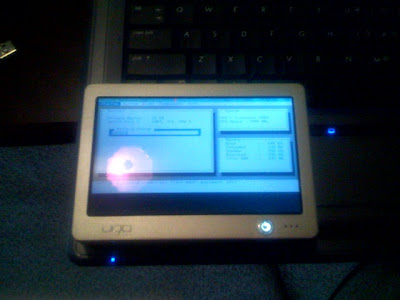 Work just sent me an OQO 01… Neat little thing, and YES it does run DOSBox… but it’s super slow. Ive also just moved out of New York… which has been an adventure in it’s own right. I’ll have to dig thru some of the heaps of stuff I have on it’s way to find something cool to write about further…

While on the topic of Frontier Elite this week, I was wondering if they by any chance ever released the source code… It appears not, however there were largely two versions the original being in 68000 assembly then a port to 80286 real mode ASM.
But then I found this:
http://tom.noflag.org.uk/glfrontier.html
Tom Morton has taken the Atari ST version of Frontier, and removed the hardware access from the assembly, then tweaked a m68k assembler to either output in C or i386 asm… So he’s basically reversed a copy of Frontier to allow it to run natively!
And he’s added OpenGL support to some degree! It’s VERY cool!
At a minimum I bet there are people out there that would LOVE this guys programs to convert m68k assembly listings into either C or i386 asm. Or a chance to hack the ‘source’ like crazy.
I’ve also come across this great site http://www.jongware.com/galaxy1.html which goes over various algorithms from the game.

I was playing with DOSBox on an XP machine, and I came across this exciting link: http://www.eliteclub.co.uk/download/ You can now download Frontier II as shareware! Most cool, so I’ve downloaded it & just run it under DOSBox. No tweaks, answer for the SoundBlaster sound card, and away you go! Here is me attempting to do a flyby of the Saturn system..

This game was super cool back in the day for it’s realistic physics as you could do slingshots, flybys, orbits & even land on various moons & planets. There is nothing more exhilarating then flying through the solar system or the universe at hundreds of thousands of Km/s. Not to mention the hyper drive!

You can give it a shot too, if your browser is Java enabled!  Just click right here, and enjoy!

It’s been a long while, life has been busy. But I figured I ought to try to make a post this year!

Ok, I’ve gotten a new laptop over the last few months & I’m running the 64 bit version of Vista. One or the first things us old people will find is that the MS-DOS & Win16 subsystems have been completely removed.

This of course, poses a massive problem! How to play games!!!!?

Thankfully there exists two really great solutions for Vista 64bit users. The first one I’ll suggest is Virtual PC from Microsoft, and DosBox.

It’s no wonder Microsoft has made Virtual PC a free download (http://www.microsoft.com/windows/products/winfamily/virtualpc/default.mspx) since they have crippled the compatibility of the OS. Now I’m personally a little biased for Virtual PC as I’ve been using it since it was owned by Connectix. Virtual PC is a complete PC emulation strategy, allowing you to run MS-DOS or quite a few other operating systems. For this example I’m going to install MS-DOS, but it’s capable of running all kinds of other operating systems.

Now back to my laptop. It of course doesn’t come with floppy drives, so I used an older PC with a drive to create disk images. (it was running OpenBSD so I just ran ‘dd’. Winimage is capable of creating disk images as well). Of course I could use a USB floppy drive and boot my MS-DOS 6.22 floppies from that as well.

The cool thing is that you can setup a virtual machine, boot off either real floppies or virtual disks, and you will need to setup a virtual hard disk. Naturally it will need partitioning, and formatting. As for installing games, again if you have floppies of them, everything is cool. There even is an emulated CD-ROM device, however you will need a device driver to use it! (http://www.google.com/search?q=idecd.sys) Virtual PC emulates an IDE CD-ROM, and you can use just about any driver you can find out there. Once you can read CD-ROM’s under the emulated MS-DOS you can install the ‘extensions’ program, which has an idle program (to stop the emulator from consuming 100% of your CPU, as MS-DOS has no inherent idle loop), and a neat program called fshare. Fshare will allow you to give your emulated PC access to a directory on the host computer.

The plus’s of Virtual PC is that it’s a more accurate emulation, it provides sound blaster pro emulation, and good psudo device emulation. The major downside for me is that it provides no joystick emulation. Of course you’ll need to bring your own DOS, however I imagine that freedos (http://www.freedos.org/) ought to work just fine, but I kind of like the real thing.

The second emulator I’d like to mention is DOSBox (http://www.dosbox.com/). Unlike Virtual PC, DOSBox is not a complete system emulator, it’s designed specifically to run MS-DOS programs. So you will not need a copy of MS-DOS, nor will you need to worry about such hassles as media, or emulated hard disks.

To run DOSBox for the most part all I do is add the following lines into my config file:

This will make my “c” drive a dos directory in my home directory on Vista, and change the current directory there. From here I can unzip any of the old programs I have, or just copy from CD to my vista directory and just run things. Overall DOSBox has pretty good compatibility. I’ve even run Windows 3.1, and some compiler & development stuff. And yes, it supports Joysticks & the emulation of various sound cards. DOSBox also has various throttle and various video emulation strategies. The other cool thing DOSBox can do is setup a virtual IPX/SPX network, and allow you to play old DOS multiplayer games over the internet. Warcraft 2 & Doom work quite nice under DOSBox. While Virtual PC does provide virtual Ethernet interfaces, it does not provide a way to connect them up over the internet. While it could be done with loopback adapters & PPTP routing, it would be way beyond the average user. DOSBox can listen on a specified TCP port, you can setup your internet router to redirect that port to the host PC, then allow your friends to connect in.

While I can understand Microsoft’s desire to cut all ties with past OS’s in terms of support, It’s a good thing that there still exists an emulation strategy for the two of us. And between DOSBox and Virtual PC hopefully your needs will be met.

*Yes I’m aware of VMWare, however it’s not technically free, and while you can create your own config files, and disk images in Qemu, and install your own OS, it’s not the ‘right’ thing to do according to the EULA.